The Evolution of Augmented Reality in Print Advertising

The Most Touching Campaign, Ever

Some of the most exciting parts of watching the Olympic Games are the surprises: when a relatively unknown athlete steals the spotlight from the anticipated winner, someone breaks a record, or misses a landing. It’s in these moments names become known, memes are made, and personal brands are born.

This phenomenon was in full effect in Rio in 2016, when the most unlikely candidate emerged as a fan favorite for the games. She was undoubtedly one of the surprise breakout stars in Rio and has continued to ride her success during the Olympics to other high-profile gigs, in sports and even Hollywood. Of course, I’m talking about former Saturday Night Live cast member, comedian, and Twitter Queen Leslie Jones (@Lesdoggg).

Jones wasn’t the only celeb tweeting her support for the games and the athletes, and she certainly wasn’t the most famous, but her unbridled passion for and the sheer entertainment factor of her viral tweets made her a star. NBC was quick to notice her popularity, and the opportunity to cross-promote Jones and SNL, and capitalized on it, sending the Ghostbusters star to Rio to report on the games and interview the athletes. The stunt paid off and was immensely successful for Jones and NBC.

The U.S. gymnastics team was also able to use social media to make their mark in Rio. Simone Biles, Gabby Douglas, Madison Kocian, Laurie Hernandez, and Aly Raisman wasted no time giving their fans a sneak peek into their lives in Rio, with fun selfies, shots with other athletes, and of course a hashtag (#SquadGoals).

These are just two examples of how social media is influencing and changing how consumers consume the Olympic games, from how, when, and where people watch them to how brands of all sizes and budgets can use the games to connect with their most sought-after audiences.

And brands are competing in an increasingly crowded arena, pun intended, with more and more ways to connect with sports fans. But when it comes to advertising during the Olympics—and using the Games in your ads—brands need to get creative. That’s because the Olympics have sponsors, not advertisers, so unless your brand is on par with Coca-Cola, GE, Visa, or the other official Olympic sponsors, its best to think outside the box. (Sponsorship accounts for 20% of revenue for the International Olympic Committee (IOC), so they’re keen to safeguard that income by monitoring for violations.)

Today’s Olympics is one of the most popular televised events in the world, watched by billions of people around the globe. Each of the 13 worldwide Olympic partners of the games will pay around $100 million per four-year Olympic cycle. Of course, The Olympic Games provide incomparable returns for the sponsors.

There are only 13 Worldwide Olympic Partners that sponsor the Olympic Games. That means they’re the only brands allowed to include the Olympics branding in their marketing and advertising campaigns: Coca-Cola, Alibaba Group, Atos, Bridgestone, Dow, General Electric, Intel, Omega, Panasonic, Procter & Gamble, Samsung, Toyota, and Visa. And because Olympics sponsors spend big—well into the nine figures—the IOC is very careful to ensure they get their money’s worth.

Rule 40 is a by-law in the Olympic Charter, stating that only approved sponsors may reference "Olympic-related terms.” It was introduced by the IOC to prevent so-called ambush marketing by companies who are not official sponsors, and to sanction links between athletes and unofficial sponsors during a blackout period starting nine days before the opening of the Olympic Games and continuing until three days after the closing ceremony.

Athletes have always been resistant to Rule 40, arguing that it makes it difficult or impossible for them to make money during the Olympics. Their criticism resulted in a further loosening of the rules. Now, athletes and other team personnel can use their own images, names, and sports performances in ads. The IOC touts their new, liberal rules as a demonstration of their transparency, but there’s another interpretation: the IOC sees that the explosion of social media has made it more and more difficult for them to enforce their rules.

Going for Gold: How Brands Can Leverage the Olympics for a Winning Social Media Campaign

Brands in other industries can’t come close to the loyalty people have for their favorite sports teams, and that sense of pride and community reaches a fever-pitch on the world stage when fans are not only rooting for their favorite players or teams, but for a victory for their country.

During every Olympics, (in addition to breakout athletes and sketch-comedy stars), there are some ads that breakthrough. Ads that skirt the complicated rules governing Olympics advertising and create memorable moments that connect with sports fans and achieve some gold of their own. Here are some brands who used social media to knock it out of the park:

The Olympic Games are watched by an incredibly broad range of fans. Not just men, Gen X, or sports fans, but basically everyone. The sense of community that the Olympics fosters is what turns the Games from a sporting event to a worldwide cultural phenomenon. Rio saw 3.6B people—more than half the global population—watch the games on TV. For better or worse, people expect a front-row seat in the lives of the people they follow on social platforms.

Because the Olympics audience is so vast and varied, brands need to reach each audience segment differently, with the media and messaging that they’ll respond to best. But since the games are no longer limited to TV, neither are its ads, and more and more brands are augmenting their traditional campaigns with social and digital advertising. And many are ditching the traditional route altogether and going all-in on the newer platforms.

Advertisers and brands need to remember this as they plan their audience-targeting strategies. Each social post that fans share about their favorite athletes or events is an opportunity to use this relevant, user-generated content to connect with their audiences. This unofficial social content, combined with the right creative execution—using imagery, hashtags, and more—is a highly effective way for non-sponsor brands to leverage the global enthusiasm of the Games.

Keep in mind that the basic best practices haven’t changed. To be successful, Olympics marketing should adhere to the same rules as marketing across industries:

DO: Know your Target

Most people watch the Olympics in some degree or another, from the super fans who paint their faces red, white, and blue to the casual fans who will glance up at the screen as the Games are playing in the bar or during dinner. Brands need to be sure who their audience is.

This all comes down to the data. Data helps us segment audiences. It tells us that we should reach die-hard fans when they’re consuming Olympics-related content, like when they’re checking updates to the medal count or reading a Cinderella story about the underdogs in the floor exercise. Display and banner ads, as well as video and native, are the perfect way to reach them. However, reaching the casual fan is more difficult, and could be achieved with influencer or social marketing, highlighting recipe ideas for an Olympics-themed viewing party they’re attending.

Rule 40 forbids any implication that your brand is partnered with the Olympics in any way. As mentioned, the official sponsors—the top 13 and the lower-tiered brands—pay big bucks for the privilege of using the Olympics branding. They, and the IOC, take infringement very seriously.

Reaching the broad Olympics-viewing audience can be tricky because if brands try to connect with everyone, they risk not connecting with anyone. This is where data and segmenting come in again. Segmenting your audience helps you reach the right people with the right message, at the right time and on the right platform. Success comes when brands pinpoint which characteristics are common to fans in the target segment and focus investment on delivering that nuance through relevant touchpoints, messaging, and experiences.

The nature of the games—how they often play out over several days—allow brands to connect with consumers multiple times, for a cumulative effect that amplifies the personal connection.

DON’T: Try to Bend the Rules

If you’re not an official sponsor and want to feature an Olympic athlete in your ads, you need to receive a waiver from the IOC. Even then, you can’t use any Olympics-related verbiage or logos in your ad, and you need to start your campaign before March (for Summer Games). Don’t try to skirt the rules and sneak in the prohibited words or images or start your campaign too close to the start of the Games. You won’t get away with it.

Brands are forbidden to use any of the Olympics’ trademarked words or phrases, including

Go for the Gold and Gateway to Gold

DO: Utilize Every Touchpoint.

When it comes to reaching consumers during the Olympics, brands need to think holistically and make sure they’re connecting with audiences in the most efficient and effective ways. For example, NBC, in addition to the usual primetime airing of the games, will be live streaming every event in 2020.

DON’T: Use an Olympic Athlete in Your Ads

Digital coverage of the games available on websites, apps, and social media channels was up an astonishing 62% from Sochi in 2014 to PyeongChang in 2018.

The incredible growth in digital coverage helped make PyeongChang 2018 the most digitally viewed Olympic Winter Games ever, with 670 million global online users viewing digital broadcast coverage. There were 3.2B videos viewed on digital platforms. That’s more than twice the number from Sochi 2014 and more than nine times Vancouver 2010.

Consider how many cord-cutters and cord-neverers there are out there—33 million in the U.S. this year. All those people, plus many more who toggle between cable TV and their mobile, will be watching the Olympics in ways that weren’t possible in games as recent as Athens and Salt Lake City. 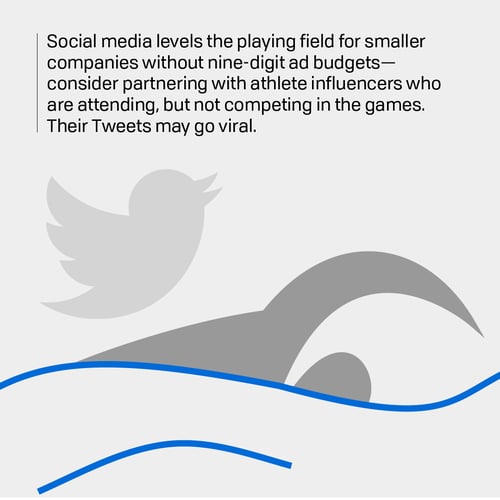 Pass the Torch to Social Media

Social media marketing emerged as a phenomenon during the 2008 Beijing Olympics, and it’s progressed as a marketing and an advertising tactic ever since.  PyeongChang 2018 was the biggest Olympics Winter Games ever on social media platforms, with official content consumed by 300 million users, resulting in over 1.6 billion video views.

The popularity of social media has opened the Olympics up as only social media can. Now, we’re treated to 24-hour coverage of everything, from backstage at the Olympics Village and behind-the-scenes political issues to budding romances between athletes and safety complaints.

Social media has also paved new avenues for advertisers, who now have access to Olympics’ viewers in real-time. And with social’s highly effective audience targeting, brands can be sure to connect with the specific consumers they need to reach. For example, advertisers can reach younger Millennials by partnering with athletes who align with their brand identity. It’s a great way to connect with their fans, and also fans of their specific sports/events.

Social partnerships with athletes—turning athletes into influencers—can benefit brands across industries. It’s an effective way to reach audiences across demographics simply by having an athlete introduce their product. This is the kind of influencer marketing that brands of all budgets can take advantage of—most brands can’t afford to partner with a big-name, gold-medal athlete, but they can get some incredible exposure teaming with a dynamic, engaging, social-savvy athlete who aligns with their brand identity.

Digital and social media make tuning in to watch the Olympics easier than ever. And more hours of Olympics coverage mean more ad inventory. Social media also makes it possible for brands of any size and budget to get in on the conversation. The Olympics audience is huge, and even includes many people who don’t usually tune in to sporting events. This is no niche audience.

No matter the medium, successful ad campaigns—during the Olympics or otherwise—have three things in common: they know their target audience, they keep it personal, and they’re present across all touchpoints. 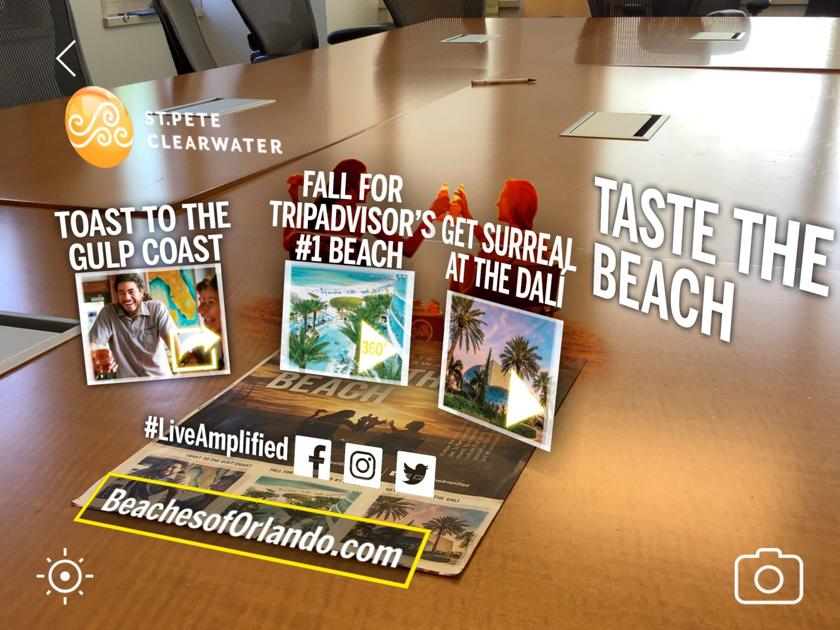