What The Olympics Has Taught Us About Marketing Strategy

How Advertisers Are Getting In The Game With Sports Betting Marketing

Fans Won’t Just Watch the Game. They’ll Get in the Game—Mostly on Mobile.

It’s Super Bowl week, which means it’s time for wings—and bets. I’ve worked at a few sports outlets, even gone to the Olympics (not Beijing), but truth be told, the extent of my gambling to date has been boxes and brackets. However, with online betting now legalized in New York, I may have to up my game.

The Los Angeles Rams and the Cincinnati Bengals will be competing in Super Bowl LVI on Sunday, February 13th. Most of the tens of the millions watching won’t be diehard fans of either team. Viewers come for the commercials, the halftime show, and, increasingly, for the gambling. They will bet on everything from who will earn the ring to who will win the coin toss. Not long ago, sports betting was taboo, left for Vegas and bookies—today it is a multi-billion-dollar business now legal in many states.

The American Gaming Association (AGA) estimated that 23.2 million people in the U.S. would wager around $4.3 billion on last year’s game. The projection had a record 7.6 million people betting with an online sportsbook, according to the survey. That was a 63 percent increase year-over-year.

“This year’s Super Bowl is expected to generate the largest single-event legal handle in American sports betting history,” said AGA President and CEO Bill Miller in a press release. “With a robust legal market, Americans are abandoning illegal bookies and taking their action into the regulated marketplace in record numbers.”

In January 2022, since online betting was legalized in New York, a record-breaking $1.6 billion in online sports bets have been placed—exceeding a previous record set by Arizona for the highest opening sports betting handle (the amount bet over a certain period of time) and surpassing the one-month record set last year by neighboring New Jersey ($1.3 billion in October). If California legalizes it next year, odds are another record will be set.

The industry is poised for explosive growth.

Brands and agencies drawn to this huge opportunity should be forewarned: Sports betting is not an easy business to break into—or break through. DraftKings and FanDuel are both owned by large public companies with deep pockets to spend on marketing, and both have vast legal and compliance teams to help navigate a patchwork of complex regulations that vary from state to state. Startup costs are steep, and in a category where most betting platforms offer essentially the same service, brands may have trouble separating themselves from the pack.

Like cannabis, many view online betting as the new frontier—but also like cannabis, the go-to-market strategy requires vigilance and adherence to state regulations for both operations and advertising and has hefty fees before profits are realized.

“Each state is a market unto itself, and there isn’t just regulatory complexity but marketing complexity,” says FanDuel Chief Marketing Officer Mike Raffensperger. “As we think about media markets, promotions, and local influencers, it is a question of where are the places we can leverage our assets at scale, and how do you put the right people and resources in place?” The company appears to be finding the right mix. According to Raffensperger, “In every state where we’ve launched, the opportunity has exceeded our expectations.”

Goldman Sachs Group Inc. predicts the online sports betting market could reach $39 billion in annual revenue by 2033—up from less than $1 billion today. Digital betting has been behind this surge. Like many online activities, it got a huge boost from the Covid-19 lockdowns. 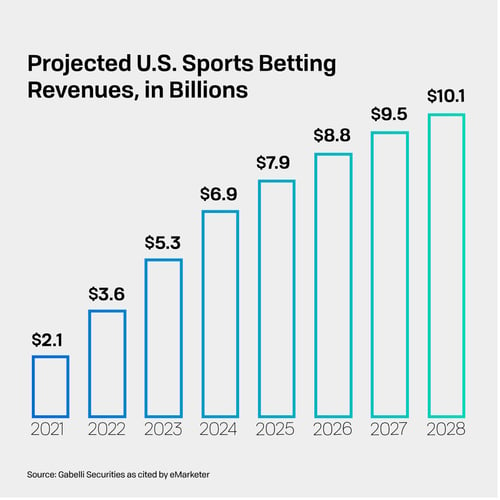 A study by research and brokerage firm Gabelli Securities and the US Census Bureau estimates that legalized sports gambling in the US will generate $2.1 billion in revenues this year and projects growth to $10.1 billion by 2028.

Other companies predict even higher revenues from legalized sports betting in the U.S., with Morgan Stanley estimating a market size of $15 billion by 2025 and Macquarie Research forecasting $30 billion by 2030. In addition, MGM Resorts International projects that sports gambling will generate $13.5 billion by 2025, with 38 U.S. states participating by that time.

Despite the discrepancies in those forecasts, which could result from differences in methodology, the takeaway is that gambling will produce significant new revenues for sports rights holders, as well as opportunities to integrate this content with traditional broadcasts and streams.

In this rapidly growing marketplace, brands need to be able to respond quickly and efficiently to changing conditions in any given market and across platforms, especially mobile—where most of the bets are placed. And it doesn’t hurt to have a trusted partner who can help build a winning marketing strategy for online sports betting.

Sports betting companies are all in. They put down $1.2 billion on acquiring new U.S. customers this year. With more states and leagues expanding the sports betting market, that figure is expected to reach $2.1 billion in 2022.

Watch any playoff game or a local station in a legalized state and you’ll likely see a barrage of gaming ads (and if you live in a newly legalized state, you may even get an in-home mailer like I did) trying to entice new customers. During the upcoming Super Bowl you can expect to see a lot of ads including the fan fav "Lady Luck" campaign from Fan Duel featuring the actress Jennifer Coolidge. In the ad, Coolidge’s character has a leprechaun, four-leaf clover, a horseshoe, and more in what look like gold pockets. All this is meant to convey how lucky users will be when they join the platform and start placing their own bets. The ad even calls out how the viewer can try their luck at placing a $5 bet and winning $280 cash.

All paid media (except social) from January to September 2020.

The majority of the brands’ paid media is comprised of national linear TV, with the rest divided up between digital, radio and out-of-home.

To further awareness, a lot of brands are also leaning in heavily to mobile and linear television. According to eMarketer, digital is becoming the dominant channel for sports viewing. Digital live sports viewership is expected to increase from 57.5 million in 2021 to 90.7 million in 2025, so having OTT ads in the mix  seems like a solid way to engage.

1. Reach Prospects with Relatable Content
Content is essential to marketing today. Take time to learn about your audience and their passions. Don’t assume that the NFL game they're watching is the only thing they’re interested in.

2. The Hidden Power of SEO
Leverage the power of keywords and SEO marketing to get more people to your website.
3. Target BOFU/MOFU/TOFU
Embrace an always-on strategy that connects with prospects at various stages in the sales funnel to keep leads warm and people coming back for more.

4. Establish a Presence on Social Media
Social media is a great place to drive engagement, if you know how to do it correctly. For instance, you'll want to focus on organic reach— but avoid paid ads on certain platforms.

However, with the right sports betting marketing strategy and advertising partners, ideally one with proven experience in targeting and nuanced state-by-state targeting, you can generate a community of followers online and benefit from:

5. Find a Proven Programmatic Partner Committed to Providing Timely Insights that Drive ROI
If you're looking for scalable digital advertising solutions, and really who isn’t, you’ll want to find a programmatic exchange to improve efficiencies. For example, Motto is the go-to for brands that value reporting and attribution visualization in the OTT space.

Keep in mind that the user experience continues after their first purchase—or, in this case, once they place their bets. This is how deeper connections and relationships with target audiences are formed, nurtured, and maintained. It’s often said that it costs more to get a new customer than retain an existing one, and this couldn’t be truer. Investing in strengthening customer loyalty through targeted campaigns increases your odds of getting more customers from online betting advertising.

About the Author
@Janine Pollack, MNI Integrated Marketing Director and self-appointed Storyteller in Chief, leads the brand's commitment to generating content that informs and inspires. Before MNI, Janine worked with Sports Illustrated for Kids and has written numerous sports Emmy profiles for the Sports Business Journal.